I'm a little late with this, but I wanted remember my friend Nathan.

I think I was in my first year of high school when Nathan's parents moved into the house behind ours. Nathan was their second child. He was a bit wild and frequently in trouble at school. Not a bad person, he just didn't like school and he wasn't shy about saying so; more of a cut up than a real trouble maker.

He was four years younger than me, and always hanging around. Kind of like having a second little brother to bug you. He and my brother became best friends.


I moved away to go to college while they were in junior high school, and only saw him a few times after that. But I heard about him from time to time from my brother . 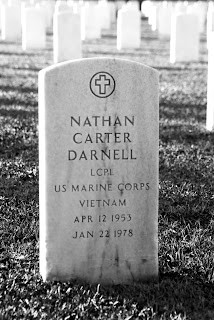 He dropped out of school at 17 when his mama signed the papers for him to join the Marines. He grew up there. He was proud of his service and proud of his uniform. I don't know why he chose to end his own life.