Shelley Lake is a popular north Raleigh recreation area. The attraction is the green-way around the lake. It's a two mile asphalt path, part of Raleigh's green-way system. 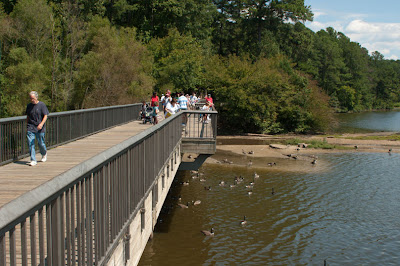 Officially Crabtree Watershed Dam #13, Shelley Lake is part of a massive flood control system in the Crabtree Creek watershed. The lake acts as a hydraulic shock absorber whenever there is more than usual rain. The outlet structure automatically limits the rate at which water can flow downstream from Lead Mine Creek.

When the rate of inflow from Lead Mine Creek exceeds the maximum out-flow the lake level rises to temporarily retard the flow and reduce downstream flooding.

Raleigh's green-way system follows the right-of-way easement for the sanitary sewer system. The bridge shown here uses the pylons that support an 18 inch sanitary drain where it crosses one the tributaries of Lead Mine Creek.

The adjacent Shelley Lake Park is actually the secondary spillway for the dam. Should the water level rise too high, it begins to spread out over the playing fields, eventually bypassing the dam as a wide, thin, slow moving sheet of water. It's a quite neat bit of engineering with no moving parts ... other than the flowing water.


http://www.raleighfree.com/shelley_lake_park.html
For the photographer, it's a miniature nature preserve in the heart of the city. Good site for photographing ducks, geese, turtles, herons and egrets. I've seen the occasional swan, and spent several weeks in 2009 photographing a Great Horned Owl's nest that was easily visible from the green-way.

Over the Labor Day weekend, I spotted a pair of Osprey's fishing the lake, although I have no idea yet if they're setting up residency or just passing through.
Posted by JS at 9:43 AM