Winston-Salem's Smith Reynolds Airport hosted its 2010 Airshow September 11-12. Saturday turned rainy and many of the scheduled performers were no shows. 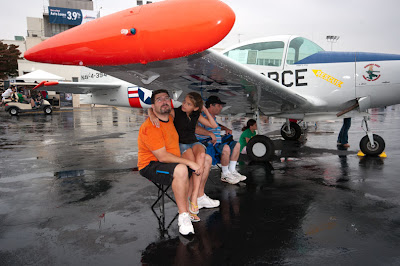 Looking at the news, more of the acts were there on Sunday.

I enjoyed the show, but didn't get to photograph the one act I really wanted to see - the Tora Tora Tora bomb squad. I saw them at Seymore Johnson AFB's Wings over Wayne in 2009 and hoped to photograph them at Winston-Salem to try out some techniques I'd learned since.

Photographing old war birds can be difficult. If you get the shutter speed too high so that the aircraft is tack sharp, you freeze the propeller and it just doesn't look right. You need about a 1/125 sec exposure to get just enough blur in the propeller.
Posted by JS at 10:05 AM